Create an Account - Increase your productivity, customize your experience, and engage in information you care about.

This house, also known as the Long Pull Farm, traces its original construction to 1729.

When Charles and Dorothy Pugh purchased the property in 1939, it was said the friends remarked "it will be a long pull," referring at that time to the distance from the road to the home.

One of the earliest and most prominent residents of the Long Pull Farm was the Reverend Willaim Latta. Reverend Latta became pastor of both Great Valley Presbyterian and Charlestown Presbyterian on April 17, 1799. He continued in this role until his death on February 19, 1847.

With 19th and 20th century additions, the house is still used as a residence today.

The home is located at 309 Swedesford Road. 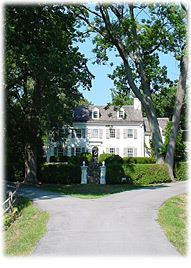